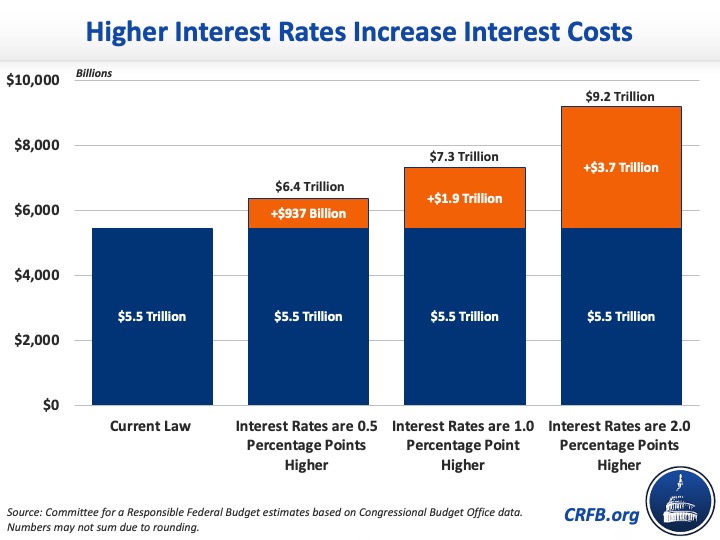 Interest rates in the U.S.–as measured using the Fed Funds Rate–have been effectively 0% since the start of the pandemic. In fact, the last time the Fed Funds Rate was over 3% was way back in 2008. With year-over-year inflation in January 2022 hitting 7.5%, it is likely that interest rates will rise. Anyone cal tell you that as interest rates rise, the cost of borrowing increases. However, it may be surprising how small increases in interest rates have a large impact on the deficit the U.S. federal government owes.

The Committee for a Responsible Federal Budget (CRFB) uses Congressional Budget Office July 2021 Budget and Economic Outlook Projections (2021-2031) and estimated how these figures would change with rising interest rates.

The numbers are not pretty. A 1 percentage point increase in interest rates would increase interest cost by $1.9 trillion (or about 26%). Further, the national debt would rise from 107.5% of GDP to 113.7% of GDP. While in the short-run, some borrowing was certainly necessary to offset the economic impact of the COVID-19 pandemic, years of deficits means that the U.S. government will continue to incur large debt service costs, which will only rise as interest rates increase.