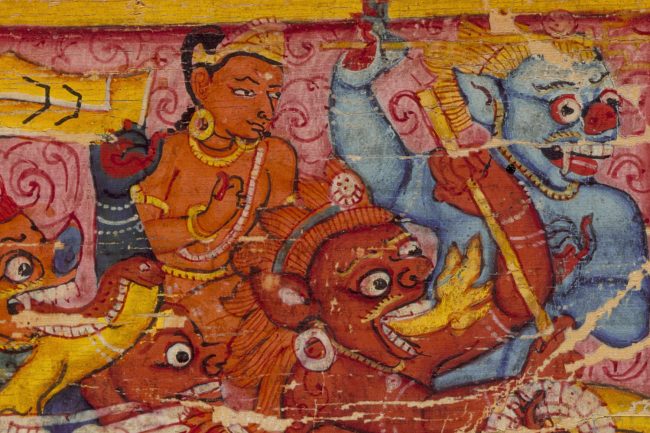 This is the first time I’ve posted here in a while. Virtually all of my energy is going into supporting Wildmind’s community of supporters — people who make a financial contribution every month in order to support me to explore and teach meditation and Buddhism. This article is condensed from a couple of pieces of writing I’ve done for them. If you enjoy this, and you’d like to support Wildmind, you can read about the many benefits that our sponsors get by visiting this page.

Have you heard of Māra? He’s a figure from Buddhist mythology. He’s often portrayed as having conversations with the Buddha and his monks and nuns. These encounters always end with Māra being recognized, at which point he vanishes.

Sometimes Māra is portrayed in art as a demon, but in the scriptures (and in the image above) he’s a good-looking young man. He’s often royally attired, and sometimes holds a lute. We can take this to mean that Māra is a smart smooth-talking Machiavellian.

The name Māra comes from the Sanskrit root, mṛ, which indicates death and destruction. That’s also where we get our words “mortality” and “murder.” Māra is the destroyer or murderer of spiritual practice, and the murderer of peace and joy.

In the scriptures he appears to spiritual practitioners, including the Buddha himself, trying to tempt them out of practicing, or sometimes distracting them or making them afraid. As well as appearing as a young man he can also appear as a fearful animal, such as a snake or wild ox. He can do things like throw boulders down a mountainside in order to cause fear. Or he can make loud and distracting noises happen. He can also create an unpleasant physical sensation.

Māra has lots of ways of distracting people, but he never, as far as I’m aware, actually harms anyone physically. I assume by this that even the earliest Buddhists regarded him as a psychological projection.

If you recognize Māra, he simply vanishes. One time he challenged the nun, Uppalavaṇṇā, who was meditating under a tree, and tried to make her feel afraid that she might be sexually assaulted:

“You’ve come to this sal tree all crowned with flowers,  and stand at its root all alone, O nun. Your beauty is second to none, silly girl, aren’t you afraid of rascals?”

She recognized him, though, and showed him that he was out-classed:

Māra then disappears. This represents the way in which mindfulness can dispel unskillful or unhelpful thoughts.

And this has become my own practice.

When I’m getting annoyed, or despondent, or impatient, or anxious, just saying “I see you, Māra” — simply recognizing that Māra was trying to trick me — was enough to break his spell and return me to a sense of calmness and balance.

I’d highly recommend trying this. Whenever you’re suffering, or caught up in anger, despondency, worry, and so on, observe the thought processes that are taking place. Observe the feelings arising within you. And then say, “I see you, Māra.” Recognize the forces that are at work within you, trying to throw you off balance. And refuse to let them fool you.

But there’s another aspect of this practice that I’d like to draw out. It’s an aspect that’s very important to me: acknowledging how clever Māra’s tricks are.

As above, the experience of unhelpful emotional arousal acts as a trigger for recognizing Māra. Any of the emotions I described above, and any others that lead to a sense of suffering, are signs that Māra is at work. Even mild distraction in meditation can be a trigger.

Now, rather than just saying, “I see you, Māra,” which is what people do in the scriptures, you can say something like “Nice try, Māra!” This is a way of letting those disruptive inner forces know that I’m onto them, and that I’m refusing to be manipulated.

You can marvel at how convincing Māra’s tricks are. After all, he had you totally fooled! The story that was causing you suffering was totally believable. It seemed that you had to respond with anger, or fear, or despondency, or whatever it was. Someone criticizes you? Well, of course you have to be annoyed and defensive. Money’s tight? Well naturally you have to worry. Something hasn’t worked out as planned? Who wouldn’t be frustrated?

And then the feelings you had were so vivid. They’re like really good special effects in a Hollywood movie. The crushing weight of despondency, the jangling buzz of anxiety, the hot upwelling of annoyance. Those feelings are not just vivid, but are powerfully compelling. It’s as if you had to act on them.

So you can applaud Māra. “Great special effects, Māra! You really had me going there!” Admire the whole process of reactivity. It’s amazing!

The other reason that appreciating Māra’s work is helpful is is that you’re appreciating it as a delusion.  You’re recognizing that the feelings that motivate you, and the thoughts and emotions that arise from those feelings, are all illusory.

Seeing the illusory nature of reactions while they’re actually happening is a powerful and liberating practice.

This perspective finds support in teachings like the one where the Buddha compared form (this includes forms we perceive in the world and also those we imagine in the mind), feelings, perceptions, emotions, and consciousness to various illusion-like phenomena:

(I’ve tweaked the translation here for the sake of clarity.)

These are the famous “five skandhas (aggregates)” which constitute our experience and which we take to be our “selves.”

Feelings have no substance. Neither do thoughts or emotions. They’re like mirages, dreams, bubbles, or conjuring tricks. They arise within us only as patterns of sensation, caused by the firing of neurons. Why be scared by a bunch of neurons firing?

In talking about the skandhas in the above quote, the Buddha doesn’t mention Māra. Elsewhere, though, he says that they are Māra:

How is Māra defined? Form is Māra, feeling is Māra, perception is Māra, emotions are Māra, consciousness is Māra. Seeing this, a learned noble disciple grows disillusioned with form, feeling, perception, emotions, and consciousness.

It’s by seeing the illusory nature of the skandhas — seeing them as tricks, designed to make us react — that we’re able to disengage from reactivity and find peace.

The other night I woke up from an anxious dream in which the US had turned into a fascist state. Once again I recognized Māra and offered him congratulations on how vivid and convincing his special effects were. It wasn’t just that the dream was realistic. It was that the feelings of anxiety in my body had convinced me that something was really wrong.

But at this point I brought another aspect into my practice, which enriched it even more

Māra isn’t literally a demon who’s out to get me. He’s a part of my mind, and he’s trying to help, within his definition of help. To this particular Māra, fascism isn’t just something I should be concerned about. He thought I needed to panic about it. He thought I needed to be in a state of fear. He thought he needed to give me good dose of suffering to help me get motivated. He’s misguided in this, but he doesn’t know that. So he’s not my enemy. In fact he needs my compassion. So I regarded Māra with loving eyes, offering him kindness.

Now, even though I was watching the anxiety from a  place of calm and peace, and didn’t feel touched by it, my body was still reacting as if it was in danger. So I embraced it within my loving gaze as well.

Now I felt completely at peace. And although the anxiety that had arisen could conceivably have kept me awake for hours, I was at this point so at ease that I fell back to sleep within minutes.

So I’m going to suggest that every time you feel upset by something or know that suffering it present, recognize that Māra is at work. Don’t just recognize him, but feel some honest appreciation for how convincing his attempts are to get us to suffer. And don’t just admire him, but offer him compassion, and offer your whole being compassion.

And as the scriptures say:

And thereupon that disappointed spirit
Disappeared right on the spot.

And within two or three minutes of being woken by an intensely anxious dream, I fell sleep again, and was untroubled for the rest of the night.

Again, if you find this helpful and you’d like to benefit from more of my teaching activity, please read up on Wildmind’s Meditation Initiative.